Are the 4 Stages of One-Worldism Distinct from the Four Hidden Dynasties? 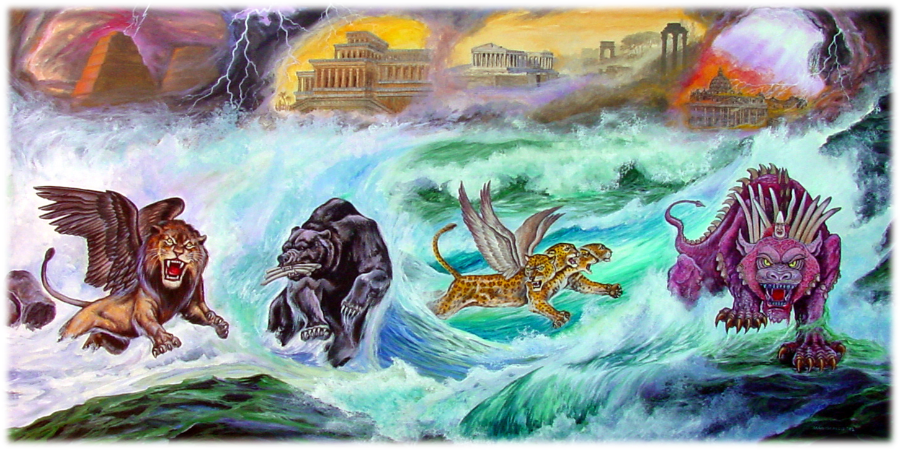 In your recent Bible Q&A on the events described in Daniel 8, you wrote that “The four stages of one-worldism are about to be ushered in, one after the other in fairly rapid succession (Daniel 8:8, which corresponds directly to Daniel 7:1-8)”

Are these “four stages” separate and distinct from the four hidden dynasties which are in operation currently?

Are these amplifications of the four hidden dynasties, and are they under direct satanic rule in that short time?

If not, what are the stages? Being these are ushered in then, and as yet don’t exist.

Thank you for your questions.

You can read of each of the four stages, and see all four being implemented, one after another, in Daniel 7:1-8.

Let’s take a quick look at these four stages, without commentary, since I’ve already commented in great depth on each stage in my two “Four Winds” studies, located here and here.

Dan 7:3  And four great beasts came up from the sea, diverse one from another.

Dan 7:6  After this I beheld, and lo another, like a leopard, which had upon the back of it four wings of a fowl; the beast had also four heads; and dominion was given to it.

Dan 7:7  After this I saw in the night visions, and behold a fourth beast, dreadful and terrible, and strong exceedingly; and it had great iron teeth: it devoured and brake in pieces, and stamped the residue with the feet of it: and it was diverse from all the beasts that were before it; and it had ten horns.

Dan 7:8  I considered the horns, and, behold, there came up among them another little horn, before whom there were three of the first horns plucked up by the roots: and, behold, in this horn were eyes like the eyes of man, and a mouth speaking great things.

So, it seems to me that the “deadly wound” must happen during one of the first three stages of one-worldism, i.e., either the lion stage, the bear stage or the leopard stage.

My best guess, based on Revelation 13:2-3, is that the deadly wound happens during the third stage of one-worldism, which will be based at Jerusalem.  I say this only because it makes the most sense at this point in time.

That would be the so-called “leopard” stage, as written of, above, in Daniel 7:6, meaning the stage in which the Kenites visibly come to the forefront of world control.

The four main branches of Judaism (i.e., orthodox, reform, conservative, and reconstructionist) are represented by the “four wings of a fowl” (Daniel 7:6 above).  And the four hidden dynasties are represented by the “four heads” of the leopard (also Daniel 7:6, above).  And, of course, leopards are spotted, symbolizing the sinfulness of Judaism in rejecting Jesus Christ.

(Consider reading my two “four winds” studies, here and here, which go into much more detail on this topic).

So I speculate that this third stage of one-worldism is the one in which the Kenites will make their move on the Islamic Dome of the Rock Mosque at the Temple Mount, causing the Arab world to become inflamed against the Kenites.

That, I sincerely believe, will be the “deadly wound” to the world system, because the world system will be based at Jerusalem at that time. After all, it’s the Kenite (i.e., leopard) stage of one-worldism.

Then the fourth beast (meaning the fourth and final stage of one-worldism), begins to arise onto the world scene, and Satan (little horn) stands up from among that non-descript fourth “beast” and heals the wounded system based at Jerusalem.

How does Satan heal that deadly wound at the Temple Mount in Jerusalem when he begins to arise to power during the implementation of that fourth beast, or fourth stage of one-worldism?

Please keep in mind that I’m a “wait and watch” kind of fellow.  I don’t like trying to predict how everything is going to unfold if the Scripture isn’t crystal clear about it.

Indeed, I believe St. Paul’s words that at this present time, we “see through a glass darkly,” meaning we see the general outline of events coming, but not some of the fine details that can’t be known until they actually transpire.

So, I study my Bible regularly.  And I watch world events daily.  And I adjust my understanding as I learn more from the Bible, and as the events actually begin to come to pass and more of those fine details are filled in for us in real-time.

In other words, these opinions are “subject to change” as events continue to unfold, and more is revealed to us as the latter day rain begins.

So let’s keep watching, and praying (and studying our Bibles).