Do You Think the Q-Anon Messages About the Coming Take-Down of the “Deep State” Are Real? 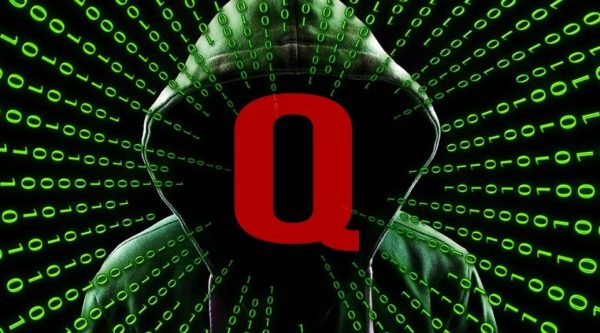 Steve, I’ve been getting a lot of messages lately (i.e., Tweets, YouTube videos and emails) from someone calling himself Q-Anon.  He says he has top secret government clearance, and that he knows about a secret plan among loyal patriotic government officials to take down the bad guys who run the country, and the world, from behind-the-scenes, and that Trump is in on this plan and is helping with it.  He says they’re trying to restore America to its original Constitutional status, and destroy the plan by the bad guys to take over the world.  He gives constant updates as to the progress that’s being made in restoring freedom.  What do you think?

But the information in those messages is certainly not Biblical. Nowhere in the Bible does it say the false Jews, “deep state” denizens and other swamp creatures who run this world from behind the scenes are going to get their comeuppance before Christ’s arrival.

It’s only at Christ’s arrival that the hidden leaders of this world get their just due (Matthew 13:40-43).

And God’s angels do the work of sorting out the bad guys, not some anonymous group of alleged government super-patriots.  As it’s written:

Mat 13:40  As therefore the tares are gathered and burned in the fire; so shall it be in the end of this world.

Mat 13:41  The Son of man shall send forth his angels, and they shall gather out of his kingdom all things that offend, and them which do iniquity;

Mat 13:42  And shall cast them into a furnace of fire: there shall be wailing and gnashing of teeth.

Mat 13:43  Then shall the righteous shine forth as the sun in the kingdom of their Father. Who hath ears to hear, let him hear.

So I trust Q-Anon about as far as I can throw him, because his messages contradict the Bible.

We both know who the anonymous ones are (the false Jews of Rev. 2:9 and 3:9 who hide behind the title of “God’s chosen people.”).

And I personally believe the “Q-Anon” stands for Qayin, the Hebrew word for the name “Cain.”

As you know, one of the methods utilized by the enemy (and by that I’m speaking of Christ’s enemies, who are our spiritual enemies as well) is to drag people into their net by presenting little tidbits of truth, and then use those tidbits of truth as the “sugar bait” to get them to swallow their lies.

Yes, I know these guys sprinkle everything they put out with a healthy dose of what we know to be the truth.  But be very careful of them. They’re merely presenting what I call a “Satan Sandwich.”

A “Satan sandwich” is something that purports to be truthful information, but contains hidden lies.

It’s composed of two nice big fluffy pieces of bread on the outside (i.e., representing truth), but several hidden slices of rotten pork on the inside (representing the lies they want you to swallow).

Q-Anon fans even call the cryptic “clues” dropped by Q-Anon in Tweets and videos “breadcrumbs.”

Think about that.  They want you to eat from the crumbs of Q-Anon rather than eat from the “whole loaf” of God’s Word, which tells you exactly how everything is going to end with pinpoint precision, and not cryptic mumbo-jumbo.

It’s an old tactic the Kenites and their ilk use when they’re consolidating power, and want to know who their enemies are:  They dangle small tidbits of truth in front of people, and watch to see who bites (in this case, they watch to see who signs up for their emails or follows their Twitter or YouTube channel, etc.)

The Q-Anon messages keep saying all of the evil ones are going to be done away with…that thousands of legal indictments are being prepared against members of “the swamp”…that Trump and others are in on this plan…etc. etc.

But where’s the beef?  Why haven’t we seen any of the stuff Q-Anon has predicted for the past year actually come to pass?

If anything, the false Jews and their embedded supporters in government are gaining more and more power. They’re not being “taken down.” Not even close.

And again, nowhere in the Bible does it say the evil ones who run this world will be taken down, until the day of Christ’s arrival (Matthew 13:40-43) when their entire world system collapses (Revelation chapter 18) under Christ’s wrath (Revelation 19:15-21).

Finally, I’d like to point out that Q-Anon claims to have a top secret “Q Clearance,” and thus is in the loop on top secret, highly classified material.

But as many skeptics of the Q-Anon phenomena have pointed out, a “Q Clearance” is only used by the Department of Energy, and it’s for energy-related security matters such as info on the nation’s power grid that we don’t want to fall into the hands of any enemy.

That’s hardly the stuff of a global takedown of the evil ones who run this world.

In my opinion, whoever is behind Q-Anon is banking on people’s ignorance.  (See also the Wikipedia page about Q-Anon, here.)

Many years ago (mid-1970’s) there was a man who called himself Dr. Peter Beter (I’m not kidding).

Dr. Beter gained a huge following among conservatives and patriots with his newsletters and audio tape broadcasts which purported to reveal the “top secret” truth behind many world events.

He claimed to be a big shot “insider” in Washington.  He even ran for political office at one point.  And he gave extremely detailed accounts of conspiracies he claimed were happening at time.

He claimed, for example, that the Rockefellers were getting ready to take over America and institute an immediate nationwide dictatorship (again, this was in the 70’s)…that all of the gold in Ft. Knox was gone… and that the Japanese attack on Pearl Harbor was actually planned by American businessmen.

He further claimed that David Rockefeller, Henry Kissinger and Jimmy Carter were not real men, but instead “organic robotoids.”

My early business mentor, friend and writer’s agent, John Finn, knew Dr. Beter personally.   He said when he’d call him up and ask him where in the world he was getting such in-depth “top secret, highly classified inside information,” Dr. Beter simply told him, “I just make it up.”

My point is this:

You have to be very careful in this world today.  Deception is certainly worse now than it was in the 1970’s when Dr. Beter was entertaining (i.e., fooling) conservatives and patriots with his sensationalistic audio and newsletter conspiracies.

Let No Man Deceive You

Never forget our Lord and Savior’s warning to those of His servants operating faithfully on His behalf in the end times:  “Take heed that no man deceive you.”

The Lord then warns that many people will come pretending to be good guys, but in reality will be deceivers, looking to hook you in.  As it’s written:

Mat 24:3  And as he sat upon the mount of Olives, the disciples came unto him privately, saying, Tell us, when shall these things be? and what shall be the sign of thy coming, and of the end of the world?

Mat 24:4  And Jesus answered and said unto them, Take heed that no man deceive you.

Mat 24:5  For many shall come in my name, saying, I am Christ; and shall deceive many.

The very first sign of the end days is rampant deception.

I know a lot of people have emotionally invested themselves in Q-Anon and his message.  I believe Q-Anon is taking advantage of people’s hopes for a better future, maybe in order to compile extensive online profiles of patriotic Americans who sign up for his messages, or who follow him on social media.

As a Bible student, you know better.  You know the world is not going to get any better at all, but only worse until Christ’s Second Advent, when all of the evil rudiments truly will be done away with.

Let me leave you with this thought from the Bible about the end days and how everything is going to play out:

2Ti 3:13  But evil men and seducers shall wax worse and worse, deceiving, and being deceived.

2Ti 3:15  And that from a child thou hast known the holy scriptures, which are able to make thee wise unto salvation through faith which is in Christ Jesus.

Nowhere in the Bible does it say that a man like Trump is going to rise up and help overthrow all of the evil ones by using a top-secret cabal of governmental super-patriots.

Nowhere does it say those who run the “swamp” are going to be done away with by some secret group of patriots hidden in high positions of government power.

And if it’s not Biblical, then it’s complete nonsense.  And it’s a waste of good time to follow.

Instead, we’re told in the Scriptures that things are going to get worse and worse.  That deception will be rampant.  And that our only protection — knowledge-wise — is to stick to what the Bible says.

One last thought from the Scriptures:

Col 2:8  Beware lest any man spoil you through philosophy and vain deceit, after the tradition of men, after the rudiments of the world, and not after Christ.

It’s God’s Word that tells us how this is all going to end.  Not the word of Q-Anon.

So be very careful about believing in men.  Stick to the Word of God.  It quite literally foretells you all things.  And you can count on it.

God’s Word is not a trail of “breadcrumbs.”  It’s the real deal.  The whole loaf.  And it will never steer you wrong.