Is It Biblically Wrong to Have a Blood Transfusion? 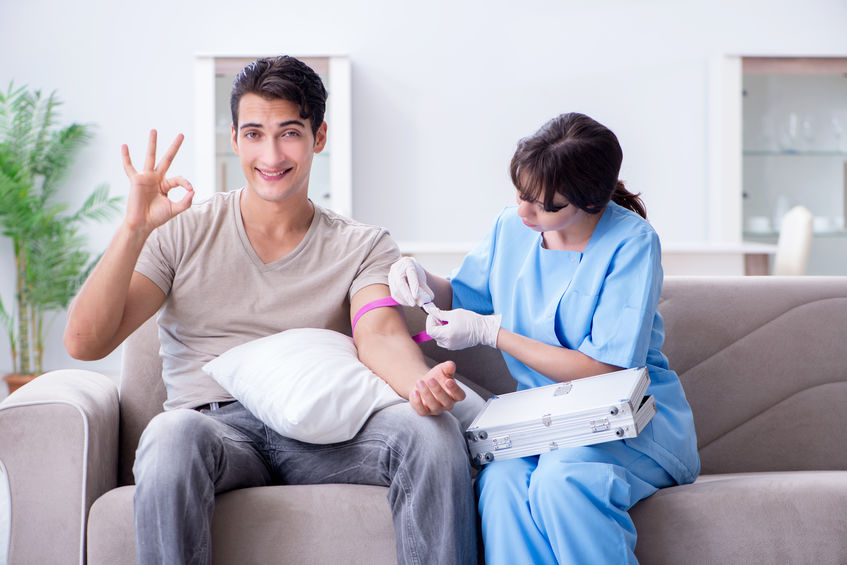 Is It Biblically Wrong to Have a Blood Transfusion?

Steve, can you comment on why certain Christian denominations believe the Old Testament prohibition against eating blood also prohibits you from taking a blood transfusion?  My sister-in-law is a devout [denomination name removed], and we’ve had long discussions on this subject.  I told her that I had to have 4 units of blood before an unexpected life and death situation surgery…I was dying of blood loss because of a ruptured ectopic pregnancy.  Anyway she made a decision that she wants to be obedient to this Old Testament law and would rather die than have a blood transfusion.  She also mentioned that you are taking that person’s DNA into your body when you have a blood transfusion. Just thought I’d run that by you.

Thanks for your question.  As with many Bible topics, it’s all about understanding the context behind the topic being discussed.  So to answer your question properly, I have to teach a short lesson on context, first.

Let me give you a couple of quick examples of what I’m talking about, in terms of the need to understand the context behind certain Bible topics, and then we’ll come back to the topic of blood transfusions afterwards:

1 Corinthians 11:14:  Doth not even nature itself teach you, that, if a man have long hair, it is a shame unto him?

Based on that verse, and without any context, one would think that having long hair is a terrible sin.  Yet Jesus Christ most likely had long hair.  So did most of the apostles, since it was the cultural tradition of those times.

Going back into the Old Testament, we find that Samson had long hair, right?  Indeed, people who dedicated themselves to the service of God would take the vow of the Nazarite, and during the time of their vow they were strictly forbidden from cutting their hair.

Numbers 6:5, regarding the vow of the Nazarite, specifically states, “He shall let the locks of hair of his head grow long.”

So there was no shame in having long hair for these men who so fervently served the Lord.  In fact, long hair was demanded of the Nazarites, by the Lord, as part of their vow.

All of these Bible characters had “long hair,” but not the shame associated with it.  Why not the shame?  Because they weren’t letting their hair grow long for immoral purposes.

Instead, the Nazarite was deemed by God to be “holy to the Lord” (Numbers 6:8), and his long hair was an outward sign of that holiness.

So when St. Paul wrote 1 Corinthians 11:14 above, saying it’s a shame (i.e., disgrace) for a man to have long hair, the context was widely understood to mean for the specific purpose of playing the role of a woman during the sex act.  In other words, for the purpose of homosexual sex, or transvestitism.

That’s the proper context.  That’s why it was considered to be a “shame” for a man to have long hair.

But without an understanding of the proper context of Paul’s statement, most Christians immediately jump to the conclusion that long hair is something shameful when worn by a man.

That’s why the hippies of the 60’s, with their long hair, were so often vilified by church leaders, even when they were part of the so-called “Jesus movement” (i.e., essentially a “hippies for Jesus” movement personified by long-haired folks like the 1970’s gospel singer Larry Norman).

That’s also why Americans Indians who sport long hair as part of their cultural tradition have been wrongly told by Christians that they have to cut their hair before they can become Christian.  It’s a misunderstanding of the context of God’s prohibition on long hair.

Long hair, in and of itself, does not anger God.  It’s the reason a man let’s his hair grow long that determines whether or not it’s a “shame” for the man to wear it.  If it’s so he can pretend to be a woman during a homosexual sex act, then God’s against it, and so should Christians be, likewise.  But otherwise, long hair is fine.

Another Example of the Importance of Context

Likewise, Deuteronomy 22:5 admonishes us as follows:

Deu 22:5  The woman shall not wear that which pertaineth unto a man, neither shall a man put on a woman’s garment: for all that do so are abomination unto the LORD thy God.

Yet at the time in history that Deuteronomy 22:5 was written, both men AND women wore skirts!

Men’s skirts were called “tunics” or “robes,” but they were nevertheless skirts.  In fact, when you see the phrase “gird up your loins” in the Bible, in relation to a man, it meant that the man was to reach down and grab the bottoms of his skirt and pull them up between his legs to his waist-front, tucking the bottoms of the skirt into his belt so that he could run or do other physical labor without his skirt blowing up in his face.

So again, context is all-important.

Yet for hundreds of years now some Christians — who don’t understand the context behind that verse — have ignorantly used that verse to pummel women for wearing pants suits to church.

Likewise, Scottish and Irish men who wear culturally traditional kilts (i.e., skirts) to formal or social events, such as church, have gotten fed up with fellow Christians erroneously telling them they’re dressing in violation of Deuteronomy 22:5.

Yet the verse had nothing to do with how you dress for church.  It had to do with the intention behind your clothing choices.  If you were playing “dress up” for sexual purposes — for example, men wearing women’s clothing so they can play the part of a woman during the sex act, or women wearing men’s clothing for the same purpose — then you were in violation of that Scriptural prohibition.

Once again, modern-day transexualism and transgenderism fits the bill, here. Both are abominations before the Lord, because they promote the abomination of homosexuality.

Back to Blood Transfusions vs. Drinking Blood

So, it’s much the same with the Biblical admonition against drinking blood.  You’ve got to understand the context of God’s prohibition against it, before you can understand how to apply it.

Let’s take a look at the Biblical prohibition against drinking blood, first:

Lev 17:10  And whatsoever man there be of the house of Israel, or of the strangers that sojourn among you, that eateth any manner of blood; I will even set my face against that soul that eateth blood, and will cut him off from among his people.

Lev 17:12  Therefore I said unto the children of Israel, No soul of you shall eat blood, neither shall any stranger that sojourneth among you eat blood.

Lev 17:13  And whatsoever man there be of the children of Israel, or of the strangers that sojourn among you, which hunteth and catcheth any beast or fowl that may be eaten; he shall even pour out the blood thereof, and cover it with dust.

Back in Old Testament times (and even today, when it comes to occultists) the heathen believed that drinking blood — whether of animal source, or sometimes even human — promoted greater-than-normal longevity, gave the drinker supernatural energy, and raised him to a higher spiritual plane.

In other words, a modern blood transfusion is done as a last-ditch effort in order to save a life so it can reach its normal, God-given lifespan.

It’s not done for some occult or Satanic purpose.  And it’s not done to increase one’s lifespan beyond that which God has already granted (i.e., it’s not done in a vain attempt to achieve “immortality” without Christ Jesus, which is a blasphemous act).

So again (and I’m sorry for belaboring this point so much), it all boils down to understanding the context in which the prohibition was given, just as it does with the prohibition against long hair on men or the prohibitions on men and women wearing each other’s clothing.

Finally, in regards to your last statement about “taking that person’s DNA into your body when you have a blood transfusion,” here’s what MedicalDaily.com has to say on that topic:

“When donor blood is mixed into the body with a transfusion, that person’s DNA will be present in your body for some days, but its presence is unlikely to alter genetic tests significantly.  It is likely minimized because the majority of blood is red cells, which do not carry DNA — the white blood cells do.

…studies have shown that highly sensitive equipment can pick up donor DNA from blood transfusions up to a week after the procedure, but with particularly large transfusions, donor white blood cells were present for up to a year and a half afterward.

Still, even in those latter cases, the recipient’s DNA was clearly dominant over the donor DNA, which is easily identifiable as a relatively inconsequential interloper.”

I don’t write any of this to disparage the beliefs of any Christian denomination.  In my view, if someone doesn’t want to have a life-saving blood transfusion during a medical emergency, that’s their prerogative.  Just as many people today have DNR orders (Do Not Resuscitate), so others choose not to do blood transfusions or partake of other potentially life-saving measures.

But Biblically speaking, a life-saving blood transfusion during an emergency (for the purpose of living out one’s normal lifespan) is not the same thing as the heathen practice of drinking blood to achieve “immortality” or greater strength, or the occult practice of doing so to summons demons, or to imbue oneself with someone else’s “spirit.”  Those are just vile (and largely vain) acts of thumbing one’s nose at God.

Now some might say that if you are so sick you need a blood transfusion, that’s Father’s way of letting you know it’s time to come home, to heaven.  And you should refuse the transfusion and die, lest you subvert God’s will.

But believe me, if you’re sick, and your heavenly Father truly wants to take you home, there’s no amount of blood transfusions you can take to subvert His will.  The blood transfusion simply won’t work if it’s your time to pass on to the other side.

But without the blood transfusion, you’d have no way of knowing whether or not your allotted time on this earth is truly up yet.  Experts say 4.5 million Americans alone are saved by blood transfusions each and every year.   And why?  Because God wanted those folks to stick around in the flesh a while longer.

If He didn’t want them to stick around in the flesh longer, the blood transfusion simply wouldn’t work.  As amazing as modern medical science is, it still can’t circumvent God’s will for any individual.  Think about it.