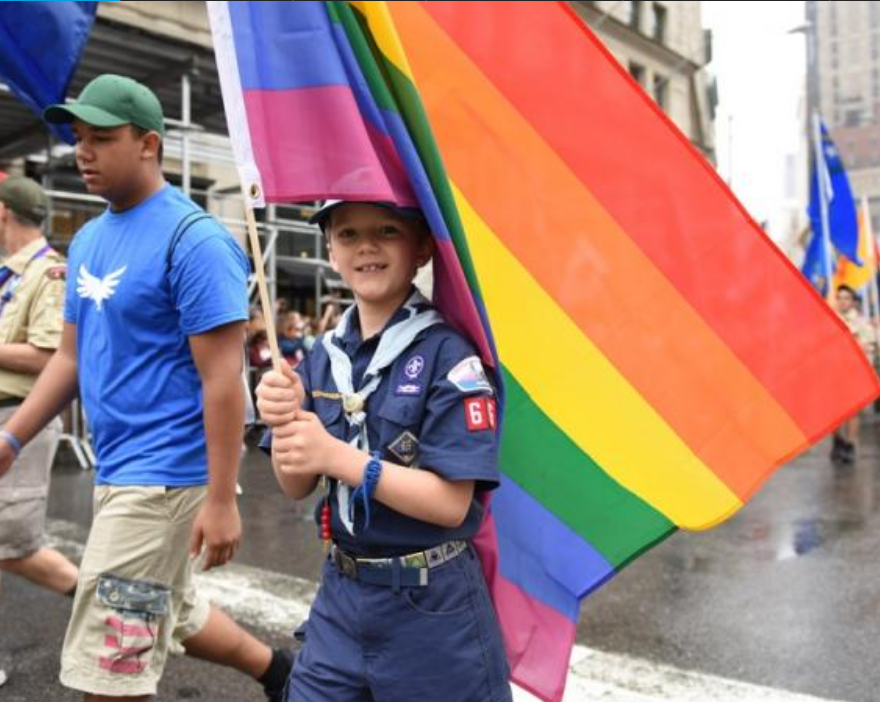 The Witherspoon Institute certainly “gets it” when it comes to the tragedy unfolding in the former “Boy Scouts of America,” now simply referred to as “Scouts BSA.”

They point out that the Boy Scouts are essentially becoming an androgynous organization by surrendering to the so-called “gender revolution,” which I prefer to call gender confusion revolution since it’s another big step toward global Babylonianism under the “god of this world,” Lucifer (II Corinthians 4:4).

More on that in just a moment, but first a quick time-line of the recent astonishing and mind-boggling changes we’ve witnessed in the Boy Scouts, as a reminder of the gradual process that has brought about this gender confusion:

What next?  Glad you asked:

Now the Boy Scouts…err…Scouts BSA…are being told they must make condoms “readily and easily accessible for all participants” at their upcoming global gathering known as the World Scout Jamboree, which will be held from Sunday, July 21, 2019 to Thursday, August 1, 2019, in West Virginia.

Did anyone not see that coming?  The destruction of youthful innocence and sexualization of children has clearly been the goal all along.

The World Scout Jamboree is being billed as a “celebration of cultural exchange, mutual understanding, peace, and friendship” that will open “a new world of life-changing experiences that will help you develop your physical, intellectual, emotional, social, and spiritual life.”

Yeah.  Sure it will.  They forget to mention a potential grooming ground for pedophiles and perverts, as well.

According to page 11 of the Jamboree guidelines distributed by the World Organization of the Scout Movement (WOSM), “Host Organization must ensure that condoms are readily and easily accessible for all participants and [International Service Team] at a number of locations on the site.”

John Steinberger, chairman for the Christian scouting alternative known as Trail Life USA, correctly notes that the new policy makes the event “sound more like a 1960s Woodstock festival rather than a campout that parents would want to send their children to.”

“These policies present a clear youth protection problem that the BSA absolutely refuses to recognize. The fact that they are requiring that condoms be ‘readily accessible’ and are communicating this to everyone – including youth participants – shows that the BSA is both anticipating and facilitating sexual conduct between minors at this event.”

“Succumbing to the Gender Revolution”

The Witherspoon Institute, which I mentioned earlier, has come pretty close to hitting the nail on the head in their analysis of the situation, stating:

“The incremental surrender of the Boy Scouts to the gender revolution has undermined the very reason for their existence.

… For the past several years, the Boy Scouts have been in the process of reinventing themselves in the image of progressivism by pursuing a more “inclusive” approach to scouting.

Their decision to no longer maintain sex distinction in their membership is a discrediting action.

…tragically, the Boy Scouts have, for some time, been catering to progressive values, leading them to forsake their tradition and focus instead on pacifying the demands of activists.

What began with allowing gay male Scout leaders has led to endorsing transgenderism in its membership. The Boy Scouts have thus become the most respected youth institution in America to kowtow to progressive ideas on sexuality, gender, and gender distinctions.

In these actions that reflect departures from natural law and the broader Judeo-Christian moral tradition, the Boy Scouts of America are now a progressive organization, whether they would admit it or not.”

The Witherspoon Institute goes on to point out:

“The actions of the Boy Scouts are a part of the broader cultural movement to declare sex distinction taboo.

Doing something as innocent as calling a boy a “boy” and a girl a “girl” is now considered dangerously retrograde. Intentionally or not, the Boy Scouts’ actions are contributing to our culture’s assault on reason and the body.

Sex difference and gender distinction are naturally occurring social realities that follow from being embodied, sexed creatures. We cannot simply wish — or legislate — these realities away.”

The Witherspoon Institute concludes that the ultimate goal of these astonishing changes in scouting is to “esteem Androgyny as the predominant gender ethic in society.”  They write:

“It is no surprise that the Boy Scouts have opened their membership to both sexes. Once the organization accepted homosexuality and transgenderism, it was inevitable that basing membership on sex would fall.

“The move to no longer base membership on sex is yet another plank in the broader movement to esteem Androgyny as the predominant gender ethic in society.

The ethic of Androgyny is one that blurs, nullifies, or twists sex difference and gender distinction by making them indeterminate.

So to prevent natural differences from occurring that follow from sex and gender differentiation, the abiding ethic of sameness reverberates through society.

Androgyny demonstrates the fundamental hypocrisy of a culture that esteems fairness and equality but undermines accurate forms of both to serve the cause of political correctness.

Because of this, the Boy Scouts organization is a shell of its former self, proclaiming to the broader society that Androgyny Scouts are the only appropriate pathway for human expression in a genderless and gender fluid age.”

As I pointed out earlier this year in my Bible study, Lucifer: the Divine Androgyne, Ancient God of the Modern Transgender Movement, transgenderism is not a mere fad or passing phase.

In reality, it’s part of a broader cultural revolution designed to overthrow the moral underpinnings of western Christianity, and usher in a global transformation that will ultimately result in the rise of what the New Testament calls Mystery, Babylon the Great, the Mother of Harlots and Abominations of the Earth.

The Boy Scouts are merely a cultural microcosm (but a very important one) of what’s now happening on a global scale.

The New Testament tells us that the “god of this world” is Lucifer, and that his goal is to “blinded the minds of them which believe not, lest the light of the glorious gospel of Christ, who is the image of God, should shine unto them” (II Corinthians 4:4).

Gender confusion leading to an androgynous earth — a people so confused they, as the David Bowie song Rebel Rebel put it, “don’t know if you’re a boy or a girl” — is part of what the occultists and Kabbalists call Satan’s “magnum opus” or “great work” of global transformation.

In that so-called “great work,” the blending of opposites — in this case, male and female — is being used to institute a worldwide transformation designed to overthrow and replace the established order and its traditional morals, and ultimately reverse the global trend toward unity of God’s children under Christ Jesus that’s taken place over the past 2,000 years.

And it’s moving ahead at full steam.  Learn more here.