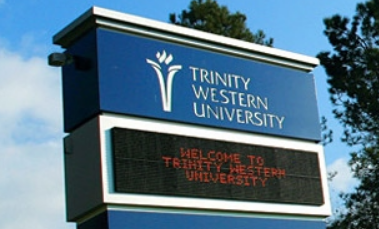 According to this news article, a private Christian law school in Canada has been denied accreditation because of its requirement that students agree to reserve sexual intimacy for marriage and keep marriage between a man and a woman.

While lower courts affirmed the right of the school to set their own policies in line with their religious beliefs, the case was continuously appealed and eventually went all of the way to the Supreme Court of Canada, which ruled the school’s “lifestyle covenant” to be “exclusionary,” and therefore could cause “harm” to homosexuals.

“‘The reality is that most LGBTQ individuals will be deterred from attending TWU’s proposed law school, and those who do attend will be at the risk of significant harm.’

“Limits on religious freedom are often an unavoidable reality of a decision-maker’s pursuit of its statutory mandate in a multicultural and democratic society.

“Religious freedom can be limited where an individual’s beliefs or practices harm or interfere with the rights of others,” they wrote.’”

“According to the Bible, sexual intimacy is reserved for marriage between one man and one woman, and within that marriage bond it is God’s intention that it be enjoyed as a means for marital intimacy and procreation.

Honoring and upholding these principles, members of the TWU community strive for purity of thought and relationship, respectful modesty, personal responsibility for actions taken, and avoidance of contexts where temptation to compromise would be particularly strong.”

So now the Supreme Court of Canada has essentially ruled against religious freedom, chastity and Biblical marriage, in one fell swoop, and in preference to the “feelings” of homosexuals who might be “hurt” if they’re asked to live a moral life while attending a Christian school.

This is not a “one off” situation, beloved.  This is the trend of our times.  Churches will be next.  And there’s only one reason for it:

It’s designed to force Christian organizations to renounce their Bible-based policies and accept wickedness and immoral behavior as part of their very structure.

And the homosexuals and their ilk are not going to stop until they achieve exactly that.

What must Christians do?  It’s simple.  You have to make a decision.  You have to decide whether to cave in to the world and its debauchery, or stand in solidarity with God and His Word.

As the days go on, and the sand in the hour glass of time continues to run out, this is going to become a defining decision of your life.