“Communist crucifix” given to Pope by Bolivian president Evo Morales 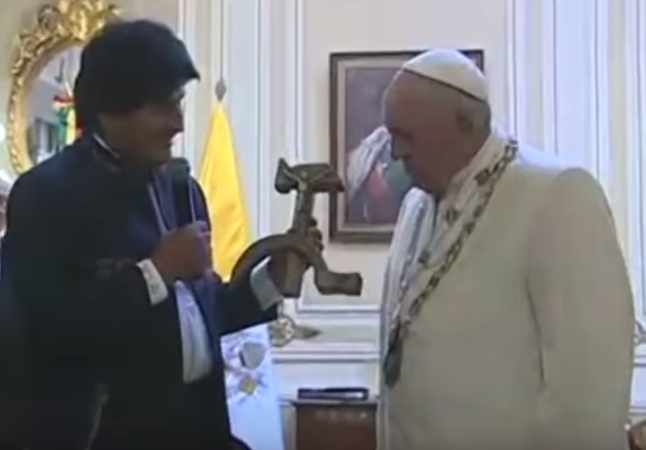 Steve’s comments:  On the Pope’s visit to Bolivia this week, Bolivian president Evo Morales – a Marxist communist – gave as a gift to the Pope a carved hammer and sickle with an image of Jesus hanging from the hammer.

The hammer and sickle, of course, is the symbol of international communism. And the gift, which the Pope accepted, has caused outrage among Christians.

Since that time the Vatican has officially been back-tracking on the issue, claiming that the carving had no political significance, but instead, was a symbol of “open dialogue” between Bolivia and the Vatican.

Of course, that’s the lamest imaginable excuse. But the Associated Press, in the news article below, not only goes along with the flimsy excuse, but romantically expounds upon it, describing the “crucifix” as having been designed by a Jesuit priest named Luis Espinal who “worked for social justice in Bolivia during a period of instability that preceded a right-wing dictatorship known for human rights abuses.”

Astonishingly, there’s not one mention of the fact that fellow Jesuits have described Espinal as a Marxist priest who was “part of the iconography of the left in Bolivia.” Indeed, according to the Jesuit-run news service Agencia de Noticias Fides, “Espinal was of the left…[He] “gave a lot of importance to the dialogue between Marxists and Christians.”

In other words, the Jesuit maker of the “communist crucifix” was a leftist Marxist who worked to blend Christianity with communism.

According to the Huffington Post, Espinal was an early leader in the movement known as Liberation Theology in which Christ Jesus is portrayed as a communist liberator of the poor standing up against their rich oppressors (i.e., meaning the west, of course, as purveyors of capitalism).

Liberation Theology essentially was designed by communists as a means of infiltrating Christianity throughout Latin America, turning the Gospel of Jesus Christ into a call for armed revolution against the so-called “oppressors of the poor.”

Of course, no mention is ever made by Liberation Theologists (such as the communist crucifix designer, Espinal), that communism’s founders actually disdained the poor, haughtily and derisively referring to them as the “Lumpen proletariat,” which means the unskilled working people of dubious benefit to society.

And no mention whatsoever is made by Liberation Theologists (such as the communist crucifix designer, Espinal) that well over 100 million of the world’s poor have been led to the slaughter under the banner of the hammer and sickle since its inception in 1917 under the communist founders in Russia.

In reality, giving the “communist crucifix” to the Pope is essentially the equivalent of having a Nazi sympathizer give the Pope an image of Christ Jesus hanging from a swastika. Under any other Pope, the gift would have been considered to be offensive, not to mention blasphemous to God Almighty and our Lord Jesus Christ.

Liberation Theology, from its inception, was designed to corrupt Christianity by blending it with cultural Marxism in order to make the infiltration of communism easier to achieve throughout Latin America, and afterwards, throughout the world.

As a blend between Christianity and socialistic humanism, it was, of course, in direct violation of God’s Word, which tells Christians to not become entangled with the unbelievers (such as communists and their humanist followers) but to instead remain separate from them, or risk separation from God as a result. As it is written:

2Co 6:14 Be ye not unequally yoked together with unbelievers: for what fellowship hath righteousness with unrighteousness? and what communion hath light with darkness?

2Co 6:15 And what concord hath Christ with Belial? or what part hath he that believeth with an infidel?

2Co 6:16 And what agreement hath the temple of God with idols? for ye are the temple of the living God; as God hath said, I will dwell in them, and walk in them; and I will be their God, and they shall be my people.

2Co 6:17 Wherefore come out from among them, and be ye separate, saith the Lord, and touch not the unclean thing; and I will receive you,

2Co 6:18 And will be a Father unto you, and ye shall be my sons and daughters, saith the Lord Almighty.

Catholic theologians, of course, eager to help staunch the fallout from the Pope’s acceptance of the gift, rushed to claim that “there is no church legislation that addresses whether Christian imagery is sacrilegious since Christian art is often portrayed in a variety of ways.”

In other words, they’re pleading innocent through ignorance, essentially admitting they don’t know the difference between Christian art and outright blasphemy against God.

So-called “moral theologian” Robert Gahl, of Rome’s Pontifical Holy Cross University in Rome, also stepped into the fray, stating that the intent of the gift to the Pope had to be taken into account, and that the intent was “…to indicate potential for dialogue and even synergy” between the communist leader and the Pope.

Gahl went on to emphasize that such symbols need to be seen from “the perspective of universal love, redemption and even Christ’s triumph over evil.”

Yeah, right. And the sacrilegious so-called “Piss Christ” image that stirred such worldwide ire among Christians in the late 1980s (back when Christians still had at least a little bit of backbone and understanding of what constitutes blasphemy against our heavenly Father and His Son) would probably today be interpreted by apostate priests like Gahl a sign of mankind’s struggle against urinary tract infections.

What sayeth our heavenly Father about such blasphemy, and its true effect on His wayward children? As it is written:

Col 2:8 Beware lest any man spoil you through philosophy and vain deceit, after the tradition of men, after the rudiments of the world, and not after Christ.

And as it is again written:

Isa 52:5 Now therefore, what have I here, saith the LORD, that my people is taken away for nought? they that rule over them make them to howl, saith the LORD; and my name continually every day is blasphemed.

And as it is written once more:

Hos 4:6 My people are destroyed for lack of knowledge: because thou hast rejected knowledge, I will also reject thee, that thou shalt be no priest to me: seeing thou hast forgotten the law of thy God, I will also forget thy children.

Hos 4:7 As they were increased, so they sinned against me: therefore will I change their glory into shame.

And what does His Word say about the religious leaders who lead His people astray with such blasphemy and deception?

Jer 5:30 A wonderful and horrible thing is committed in the land;

Jer 5:31 The prophets prophesy falsely, and the priests bear rule by their means; and my people love to have it so: and what will ye do in the end thereof?

And as it is written once more, of the final end of the false priests and false prophets of this world:

Eze 22:27 Her princes in the midst thereof are like wolves ravening the prey, to shed blood, and to destroy souls, to get dishonest gain.

Eze 22:28 And her prophets have daubed them with untempered morter, seeing vanity, and divining lies unto them, saying, Thus saith the Lord GOD, when the LORD hath not spoken.

Eze 22:29 The people of the land have used oppression, and exercised robbery, and have vexed the poor and needy: yea, they have oppressed the stranger wrongfully.

Eze 22:30 And I sought for a man among them, that should make up the hedge, and stand in the gap before me for the land, that I should not destroy it: but I found none.

Eze 22:31 Therefore have I poured out mine indignation upon them; I have consumed them with the fire of my wrath: their own way have I recompensed upon their heads, saith the Lord GOD.

As it was in Ezekiel’s time, so it will be again as Christ’s Second Advent draws nearer and nearer.

You are this very day watching the initial work of the great whore of Revelation chapter 12 turning this world into the “scarlet coloured beast, full of names of blasphemy, having seven heads and ten horns” which our Lord and Savior warned of.  In other words, communism is being ushered in, under the banner of global religion.

And as this great work is accomplished – manipulated from behind the scenes by the children of our old adversary the devil — the arrival of that old adversary draws closer and closer.

So be fully prepared, Christians, both mentally and spiritually. For it appears it will not be much longer before the great red dragon comes to take this germinating world system to wife, after it suffers the deadly wound to one of its heads, which he will heal upon his arrival.

As it is written:

Rev 13:3 And I saw one of his heads as it were wounded to death; and his deadly wound was healed: and all the world wondered after the beast.

Rev 13:6 And he opened his mouth in blasphemy against God, to blaspheme his name, and his tabernacle, and them that dwell in heaven.

Rev 13:7 And it was given unto him to make war with the saints, and to overcome them: and power was given him over all kindreds, and tongues, and nations.

Rev 13:8 And all that dwell upon the earth shall worship him, whose names are not written in the book of life of the Lamb slain from the foundation of the world.

Be patient. Be faithful. We are coming up soon on the time described in the above verses. The signs are all around us – especially when the head of the world’s largest Christian denomination accepts a “communist crucifix” in the “spirit of open dialogue” with the enemies of his own professed God.

The great apostasy is upon us. And that apostasy will continue to grow and spread until that “man of sin, the son of perdition” we know as the antichrist arrives to seat himself in Jerusalem, proclaiming himself to be “God.”

And then the whole world – well primed through the deception of religious humanism – will fall away to him, thinking him to be the “Savior” of this world.