Does a Red Heifer Being Born in Israel Signal the End of Days? 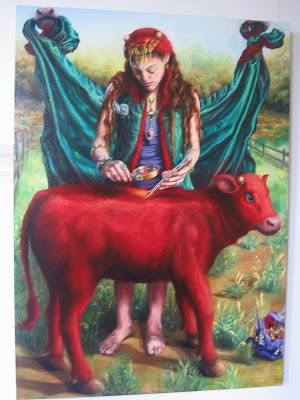 Does a Red Heifer Being Born in Israel Signal the End of Days?

The UK Daily Star published a lengthy article this week about a red heifer being born in Israel, claiming it signaled the “end of days” and the coming of the Messiah.

Indeed, their headline was:

Wow.  “Bible Prophesy FULFILLED.”  How about them beans?

The article went on to say, “A BIBLICAL prophecy has been fulfilled as a ‘red heifer’ was born signalling the end of days and the coming of the Messiah in both Christianity and Judaism.”

But let me ask you a question.  If a red heifer being born signals the fulfillment of Bible prophesy “in both Christianity and Judaism,” exactly which prophesy are they talking about, and where is it written in the Bible so we can all go take a look at it?

Answer:  There’s none.  Not a single prophesy involving a red heifer.  Anywhere in the entire Bible.  Yet look at the blaring headline as it appeared in the UK Daily Star:

Indeed, the only mention of a red heifer in the entire Old Testament of the Bible, in Numbers chapter 19, which is about the laws of ritual purification.

Open your Bible and read Numbers chapter 19.  I challenge you to find me a single verse in that entire chapter stating that a red heifer being born in the end days in Israel signals the fulfillment of Bible prophesy regarding the end days and the coming of the Messiah.

It’s from the Fabricated Testament, i.e., the testament of sensationalistic Jewish religious tradition.

Indeed, in the only chapter in the Bible that discusses a red heifer (Numbers 19), the heifer was a sacrifice needed to ritually purify anybody who’d touched a dead body.

“Restoring Purity to the World”

But the UK Daily Star article breathlessly goes on to state:

“The Temple Institute announced the birth of an entirely red female calf that ‘brings the promise of reinstating Biblical purity to the world’.”

Oh, boy.  I thought that was the job of Jesus Christ.  Silly me. The news article further states:

“Red heifers feature in end times tales in both Christianity and Judaism.”

Now they slip the weasel word into the story:  “tales.”

But what happened to prophesy being “FULFILLED,” as the news headline promised in great, big self-important capital letters?

Well, that was apparently designed to grab the attention of gullible and Biblically illiterate Christians who get their daily news from the headlines of online articles, while never reading the rest of the article.

“Messiah Has Been Born”

Nevertheless, let’s keep traipsing through this article so we can see just how Biblically reckless it truly is.  The article goes on to state:

“The cow’s birth and sacrifice is said to proceed the construction of the Third Temple in Jerusalem.

And the Third Temple’s construction – following the destruction of the previous two – heralds the arrival of the Jewish Messiah.

While some Evangelical Christian theologians have linked the building of the Third Temple to Judgment Day.”

In the section of the article I’ve quoted above, the words “Third Temple in Jerusalem” are hyperlinked. And when you click on that hyperlink it takes you to another sensationalistic article with the headline:

Again, cool beans, right?  That article claims the “Messiah” was born in July 2018.  And the claim was made by “a Rabbi,” so it must be true.  Right?  After all, no self-respecting Jewish Rabbi would ever lie to the goyim, would they?

But now you’ll notice that the birth of the so-called red heifer is being heralded as a signal for the construction of the “Third Temple,” as well as the “arrival of the Jewish messiah.”

At least they got the “Jewish” part right.  Think about that.  The Christian Messiah came some 2,000 years ago.  So now they’re tacitly admitting the Jews have a different messiah altogether.  One, apparently, that was born in July 2018, and must be — what? — some two months old now?

The news article goes on to state:

“Rabbi Chain Richman, director of the Temple Institute, hailed the red heifer’s birth as suggestions the time could be right for the Third Temple.”

Ah…now we’ve gone from Bible prophesy being “FULFILLED” to the whole story being some Rabbi’s mere “suggestions.”

But the sensationalistic article is not done.  It goes on to state:

The Temple Institute announced the birth of the red heifer on their YouTube page with the video “Red heifer candidate born in Israel”.

It includes a video of the red calf and its mother – revealing “a perfectly red heifer was born in the land of Israel”.

The cow went under “extensive examination by rabbinical experts” who confirmed she is a “viable candidate for the Biblical red heifer”.

Well, thank God the Rabbis have got it all on video, and have “extensively examined” this baby cow, and have confirmed she’s a “viable candidate for the Biblical red heifer.”

Maybe now they can start killing cows again.  Hey, who needs Jesus when you can kill a cow and be purified?

Again, silly me.  I thought the Rabbis preferred swinging chickens over their heads to get rid of their sins, in a ceremony known as Kapparot?  But they don’t like the goyim to know about things like that, do they? 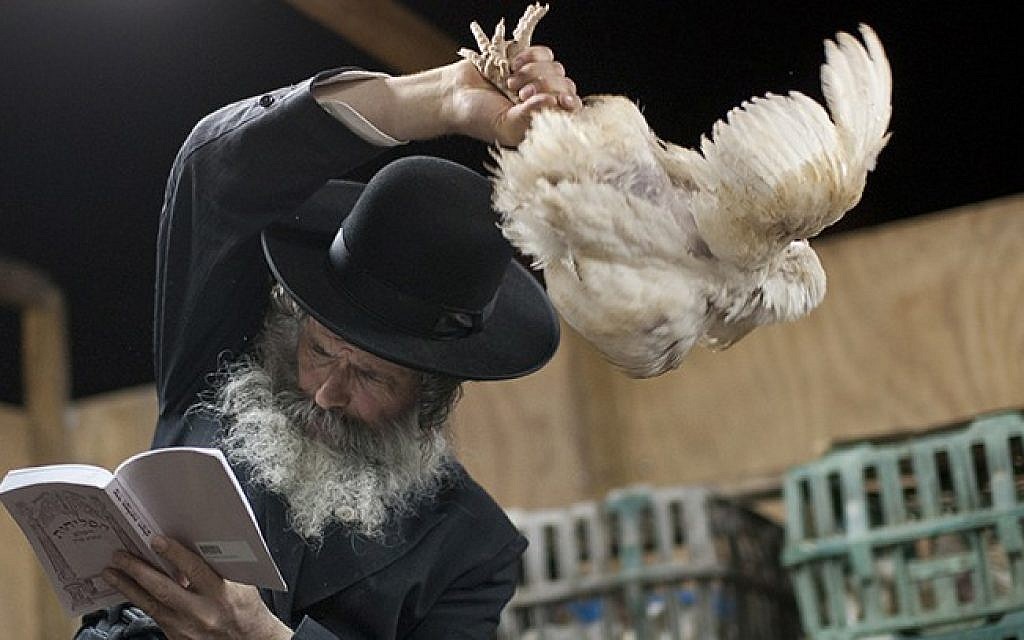 Okay, wait just a minute.  Maybe the news story is just too good to be true, anyway.  As the article goes on to state:

“They admitted however the cow could be disqualified through natural causes.”

So now we’ve gone from “Bible prophesy FULFILLED”…to “Rabbis suggest”…to “could be disqualified.”  Hardly the stuff of legitimate Bible prophesies, much less a legitimate news story.

The news article finally gets into some actual reporting:

“Temple Institute bosses founded their Raise a Red Heifer in Israel program three years ago and have trying to breed a perfectly red cow.

The newborn red heifer was verified by a board of rabbis from the Temple Institute as fulfilling the prophesied requirements.”

So the Rabbis quite literally fabricated a prophesy saying a red heifer has to be born before the end days can come…the “messiah” can arrive…the “third Temple” can be built…Judgment Day can arrive…and the world can be “purified.”

And now they’re trying to fabricate a red baby cow, in a red cow factory, in order to fulfill that fabricated prophesy.  God must be very pleased with his “chosen people.”

Look.  Kill that blasted cow now, and send me a steak. Yum.  That’s just about all it’s good for.

“Prophecy in the Hebrew Bible states the cow must be red ‘without blemish’, and must not have worked.

It is claimed there have only been nine true red heifers – and the 10th will herald the construction of the Third Temple.

The Temple Institute believes a red heifer will be needed to be scarified to complete the ritual of purification for the temple – heralding the coming of the Jewish Messiah.”

Ah, lucky number 10.  Apparently, the number of the “end days”…the building of the so-called “Third Temple”… and the coming of the “Jewish Messiah.”  Whodathunkit.  We’ll probably see Lady Gaga wearing the number 10 now on her forehead, in her next music video. Or maybe Madonna.

This must really be ticking off the Chabad Lubavitchers sect of the Jews, by the way, who claim their long-dead leader, the Rabbi Mendel Menachem Schneerson, was the expected “Jewish Messiah.”  All of those annual pilgrimages by “pious Jews” to his grave, waiting for his resurrection, for nothing.

But now we have (drum roll, please) The Baby Red Cow, Harbinger of the End Days.  Sounds a lot like a very bad SciFi movie, doesn’t it.  Something right up there with Sharknado 5:  the Global Swarming.

Missed It By That Much

The news article goes on to state:

“Red heifers have previously been found by the organisation – who have then disqualified them for not meeting prophetic standards.

One was found in 1999, but was disqualified for being male – and a second was born in 2002, which was found to have a patch of white hair.”

As Maxwell Smart used to say, “Missed it by that much.”

The news article continues to contradict itself by stating:

‘If there has been no red heifer for the past 2,000 years, perhaps it is because the time was not right; Israel was far from being ready.

‘But now, what could it mean for the times we live in, to have the means for purification so close at hand?’

He added: ‘We cannot help but wonder and pray: If there are now red heifers… is ours the era that will need them?’”

Finally, the article ends by stating:

Evangelical Christians believe the construction of the Third Temple all herald their own end times prophecy.

The prophecy has even been linked to the US President Donald Trump moving the US Embassy to Jerusalem.

Rabbi Hillel Weiss said he believes Trump’s decision over the embassy is the first stage of bringing about the end of days.

And then a third Rabbi, Pinchas Winston, claimed ongoing tensions between Iran and Israel is building to the Messiah.

Finally, one sentence of at least partial truth in the entire news article.  Yes, indeed, the “ongoing tensions between Iran and Israel” are indeed building up to the “Messiah.”

But it’s the arrival of the false messiah — the “Jewish Messiah” — and not the true Messiah that it’s building up to.  The false Christ comes first, as 2 Thessalonians 2:1-4 clearly tells us.

And that’s what we really need to be watching for, i.e., the attack on Iran spelled out in true Biblical prophecy in Daniel chapter 8, which ushers in the arrival of the “little horn” or false Christ (Daniel 8:9-12).  Not some poor little red cow produced by a fanatical (and fantastical) Jewish cow breeding program.

If you’d like to learn more about the ridiculous and blasphemous nature of the idea of reinstituting animal sacrifice in order to “fulfill end times prophesy”, consider reading the following short study:

And if you’d like to learn what Christians truly need to be looking toward, in terms of Bible prophesy that actually ushers in the end, consider reading:

News stories like the one above are designed to deceive gullible and Biblically illiterate Christians.  Learn what your Father’s Word actually says, by studying the Bible rather than getting your teachings from fantastical sources like the Jewish Rabbis.

You’ll please your heavenly Father immensely.  And just as importantly, if you’re diligent in your studies, no one will be able to deceive you into believing nonsense like that being reported in the news article above.