Easter: The Day Hundreds of Millions of Christians Thumb Their Collective Noses at God and His Word 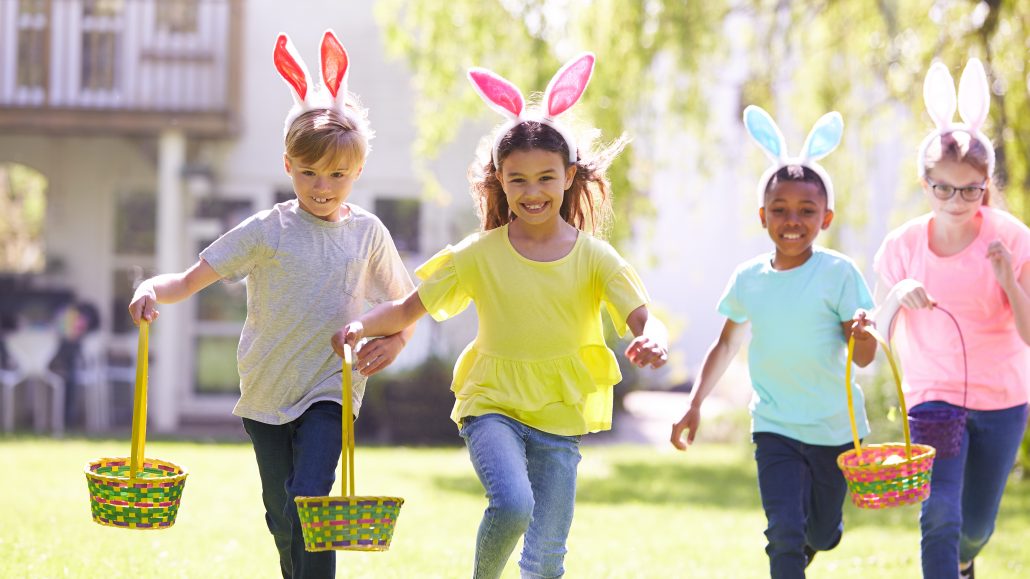 Springtime is in the air.

The grass is green, and getting taller.  The flowers are bursting forth in blooms.

…and enthusiastically celebrate a pagan “holy day” called Easter (Ishtar) instead of keeping the Passover holy day God Himself specifically commanded be set aside every year, on His behalf, “forever” (Exodus 12:17).

I know it sounds trite to many, but Christ became our Passover Lamb, not our Easter Bunny.

In Exodus 12:14, for example, our heavenly Father is doing the speaking.  And He tells us the Passover day is to be kept as a feast to Himself “throughout all of your generations” … “forever.”

Nowhere in all of the Scriptures has that command ever been cancelled.

And nowhere in all of the Scriptures have we ever been commanded to substitute another day (such as Easter) in place of the Passover, which is the High Holy Day of Christianity.

Christ didn’t celebrate the Easter “holy day.”  The apostles didn’t, either.  Not ever.  You can’t show me even one verse in the Bible where they did.

And if they’re your example (and they most definitely should be) then what are you doing celebrating Easter in place of God’s Passover?

Instead of celebrating pagan Easter, the apostles followed Christ’s command to keep the Passover communion as a memorial feast day, in remembrance of Him, as our Passover Lamb (I Corinthians 11:24-25).

And if the apostles did so, we should do so, as well.  After all, Christ commanded it.  As it’s written:

1Co 11:25  After the same manner also he took the cup, when he had supped, saying, This cup is the new testament in my blood: this do ye, as oft as ye drink it, in remembrance of me.

That’s the Passover communion, to be kept in remembrance of the Lord, until He returns.  It’s very simple.  There’s nothing complicated about it.

So, are you following God’s Word and keeping the Passover as a memorial feast to the Lord “for ever” by taking communion to Him on that specifically-prescribed day, each year?

Or, are you, like most Christians, blissfully celebrating a 5,000 year old pagan holiday each year, in place of the Passover holy day commanded by God?

Are you honestly not aware that the Passover was commanded in the Old Testament to be kept “for ever” (Exodus 12:17)?

Are you ignorant of the fact that the Passover was certified by Christ, in the New Testament, as the day in which to remember Him and His redeeming act on that cross, just as St. Paul proclaims in 1 Corinthian 11:24-26?

As Christians, we should not degrade Christ’s great Passover sacrifice by even remotely associating it with the pagan celebration of Easter (Ishtar).

Why It’s Called the Passover

When you keep the Passover God’s way, God’s promise to you is that the death angel has to pass over your house and not stop there to destroy (Exodus 12:23).

That’s why it’s called the Passover.  The death angel has to pass over your home with the Lord, and not enter, because of the shed blood of the Lamb.

Today, as a Christian, you’re to keep the shed blood of the Lord on the doorposts of your mind, by remembering Christ’s redemptive act on the Passover day, and having Holy Communion to Him on that day, each year, until He comes.

From the Christian perspective, this means you’ll enjoy eternal life when you keep the Passover God’s way, and on God’s chosen day.

But when you take Holy Communion to Christ in celebration of pagan Easter, there’s no such promise offered.

Do you realize that?

Indeed, celebrating the “holy day” of a pagan goddess (Ishtar), by taking Holy Communion to Christ as part of the day’s celebration, and expecting God to make the death angel pass over your home for so doing, is an unbiblical fantasy.

So, if you’re unaware that celebrating Easter has been a pagan sexual ritual for thousands of years – long before Christ ever set foot on this earth in the flesh — and that God’s Word tells us that our heavenly Father specifically abhors that celebration, you might want to learn more by reading the short Bible study at the following link:

Or, you can listen to the following video in which some Biblically-literate Christian church leaders explain why they don’t keep Easter, but instead, celebrate the Passover as the Lord commanded:

My Question to You

Here’s my simple question for Christians who insist on celebrating Christ’s redeeming act on that cross, on the wrong day:

Why not celebrate Christ’s redeeming act on the day He actually did it, like we’re commanded to do in the Bible?

As it’s written, we are indeed ordered to keep (i.e., preserve) the Passover:

1Co 5:7  Purge out therefore the old leaven, that ye may be a new lump, as ye are unleavened. For even Christ our passover is sacrificed for us:

1Co 5:8  Therefore let us keep the feast, not with old leaven, neither with the leaven of malice and wickedness; but with the unleavened bread of sincerity and truth.

Yes, we’re to keep the Passover feast day “with the unleavened bread of sincerity and truth.”

After all, it was that day – the Passover day – on which our Lord and Savior gave His life, becoming our Passover Lamb (I Corinthians 5:7 above).

So why do Christians reject what God’s Word clearly says to do, and substitute a pagan “holy day” in its place?

That is, until the death angel – Satan himself — finally arrives to this old earth to pull off his great deception, and you find that God’s promise to make him pass over your home has become null and void.

For the simple reason you failed to keep your end of the bargain.

You failed to keep the Lord’s Passover, but instead, celebrated the pagan feast of Easter in its place, all of those years, even trying to graft Christ into that pagan holiday by taking communion to Him on that day.

In such a case, I promise you, failing to do things the Lord’s way is not so fun. Just ask the Egyptians of old.

That’s why, in 1 Corinthians 11:24-32, St. Paul pled with Christians to always celebrate the Passover in “sincerity and truth”.

He tells us it’s critically important to do it God’s way ”lest we end up eating and drinking damnation unto ourselves.”

1Co 11:27  Wherefore whosoever shall eat this bread, and drink this cup of the Lord, unworthily, shall be guilty of the body and blood of the Lord.

When you take the Passover communion unworthily – which is to say, when you fail to take it in God’s prescribed manner – you become, in God’s eyes, like those who participated in the crucifixion of His Son.

So, how should a Christian take Holy Communion on the Passover?  Here’s what St. Paul says:

Now, most Christian churches teach that this means you need to deeply and diligently search your soul before taking communion.

In so doing, you are to find any sins that might have slipped by without being repented of, and then repent of those sins before eating of the unleavened bread and drinking of the wine.

And yes, repentance of sin is indeed an undeniable and very strict requirement for salvation.  I agree.  But failing to repent of sins before taking Holy Communion is not the only way a Christian can end up taking that communion unworthily.

In truth, what this verse says is that before taking Holy Communion, take a good hard look at yourself, first, and make sure you’re doing everything in God’s prescribed way.

Are you following God’s Word, and taking communion to Christ on the Passover day, as is commanded in the Scriptures?

Or are you following empty church tradition, and celebrating pagan Easter rather than keeping the Christian Passover communion?

Do you not realize that trying to graft Christ’s death and resurrection onto a pagan holiday is a serious blasphemy, and negates the protection afforded by the blood of the Lamb?

Indeed, it does.  As St. Paul further explains:

The phrase “eateth and drinketh” is specifically in reference to the Passover communion (I Corinthians 11:24-25), in which the Lord’s body and blood became the Passover sacrifice.

You understand that, right?

And the word “damnation” (i.e., krima, in the Greek language) refers specifically to judicial condemnation from on high.

In other words, God’s judgment falls upon you, when you fail to do things His way.

When one takes the Passover communion unworthily – meaning that it’s not being taken in the Biblically-prescribed manner – then no protection can be afforded from the death angel.

You end up with the exact opposite of what you intended:  judgment and condemnation from the Lord, instead of salvation.

Because you didn’t take the Lord and His Word seriously.  You didn’t sanctify the Passover.  Playing church and having ‘fun times’ was more important.

You preferred to ignore God’s simple directions in regards to keeping the Passover, and tried to graft the Lord’s most holy day into a pagan religious holiday, instead.

And what happens when we decide to ignore God’s prescribed ways, and do things our own way?

The phrase “cast into outer darkness” comes to mind.

1Co 11:30  For this cause many are weak and sickly among you, and many sleep.

Yes, God’s blessings disappear from your life when you reject His way of doing things, and embrace the pagan way in its place.

And yes, His blessings are largely forfeited even if you’re doing such a thing unwittingly.

Here, St. Paul is saying that if we’d just examine our beliefs and actions in light of God’s Word, and do these things in the manner God has prescribed them, instead of man’s, we wouldn’t get into such trouble.

We wouldn’t end up being judged and condemned ourselves, by God, along with the non-Christian hordes.

1Co 11:32  But when we are judged, we are chastened of the Lord, that we should not be condemned with the world.

Thankfully, the Lord knows how to chasten us, when it’s needed, in order to get us moving in the right direction again, and save us from slipping any more deeply into the ways of the world, and losing our very salvation.

So, if you’re a Christian who still celebrates Easter instead of keeping the Holy Passover commanded us, consider this short Bible commentary to be a gentle chastisement.

And consider getting yourself right with the Lord, so the Lord has no need to kick that gentle chastisement up a notch or two in order to save you.

How to Calculate the Day of the Passover

The yearly time of the Passover is very easy to calculate, directly from the Scripture.

No counting of full moons, or any of that other nonsense that was brought in by the synagogue of Satan (Rev. 2:9/3:9), is necessary.

To determine the date at which the Holy Passover is to take place each year, just go to your calendar, find the date of the Spring Equinox, in March (usually around the 20th or 21st), and count forward 14 days from there, in accord with Exodus 12:18.

It’s that simple.  So, now, you’re without excuse if you’ve been failing to keep the Passover communion, but have been celebrating pagan Easter, instead.

Next year, when the time comes around, keep the Passover communion with your family, and dump Easter.

God will bless you for it.  It’s a very serious matter to Him.  And it should be to you, too.