Georgia Guidestones Explosion: May this Turn Out to Be the “Shot Heard ‘Round the World” 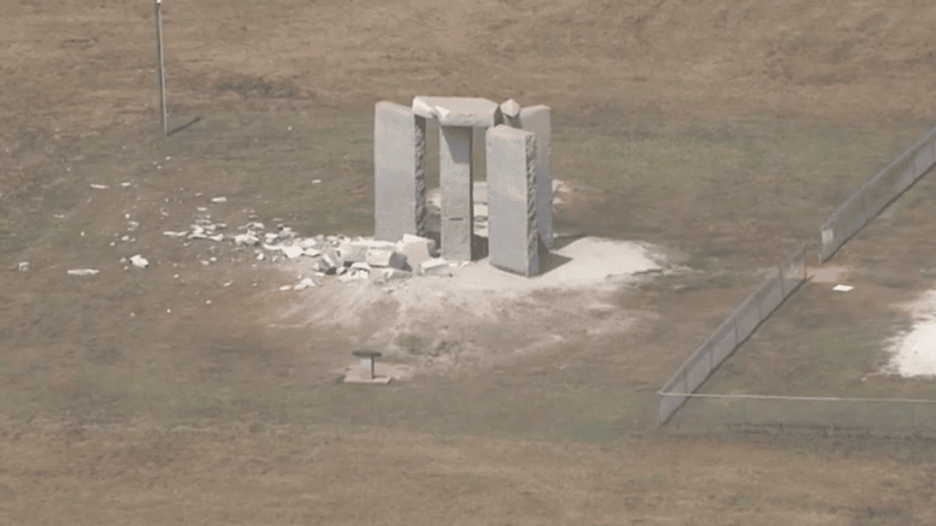 According to a news story published in Technocracy News, an explosion was heard near the Georgia Guidestones on July 6, just two days after the Fourth of July holidays.

The explosion apparently left some of the so-called “guidestones” in heaps, while others appear to remain standing.

A Threat to the Great Reset?

Technocracy News states that the powers-that-be:

“…will undoubtedly take this as a direct threat to Klaus Schwab’s Great Reset program that includes population reduction and control over earth’s resources.”

After all, it’s the Georgia Guidestones that summarized almost every point of the so-called “Great Reset,” including reducing earth’s population from the current 8 billion people to only 500,000,000 (five hundred million) subservient souls willing to work as slaves for the corporate/communist overlords.

The real question is this:

Will we accept this “shot” for what it is – a clear call to stand up on our own two feet and take our country back?

Do we have the courage to do what our forefathers did, confronting the powers-that-be with our rage and our anger and our determination, and send them scurrying like rats for cover?

That First “Shot” Heard ‘Round the World

Listen, the first “shot heard ’round the world” took place in April of 1775, when the greatest power on the face of the earth at that time – the Royal English government – sent British General Thomas Gage into Concord, Massachusetts, to confiscate the arms of the American patriots so they could not resist the King’s tyrannical onslaughts.

The Brits thought the battle would be a cakewalk for General Gage. But they seriously misjudged the patriotic American fervor.

The American militiamen saw the British troops coming, and decided they’d had enough, and were not going to be disarmed under any circumstances. (Any of this sound familiar? You’ve heard the calls for extreme gun control, lately, right?)

So, when the British troops arrived on the scene, the militiamen started shooting.

As a result, the first battle of the Revolutionary War was fought, with the famous British General Gage being pursued like a scalded puppy into Boston, and trapped there by the fully-armed American patriots.

It was that fracas – that “shot” – that was “heard ’round the world,” because it started the war for our nation’s freedom, and began the foundation of what would later turn out to be the greatest Christian nation on the face of the earth.

Now, Stripped of Our Freedoms

Since that time, unfortunately, we’ve lost the vast majority of our hard-fought freedoms.

Indeed, we’ve reached the point where the powers-that-be are stripping us of what few freedoms we might have left, so they can implement their global totalitarian plans.

They’ve made their plans very clear, in all of their published documents:

Their goal is the complete dissolution of the Western Christian Order, to be replaced by a communist technocratic dictatorship that runs every aspect of our lives.

Is Someone Reminding Us Not to Be Spineless?

Thankfully, someone there in Elbert County, Georgia, didn’t care too much for the big stone display of the murderous plans of the powers-that-be, and let them know about it on July 6, with that great big explosion.

It’s an explosion I hope and pray will be taken by Christians and patriots as a broadside against the plans of the global elite – a brand new “shot heard ’round the world.”

May each and every one of us be as courageous as the militiamen of old who confronted General Gage at Concord and sent him packing with barrage after barrage of gunfire.

We Christians are supposed to be the modern “patriots” of this nation. We’re the ones who have always said we won’t allow a communist revolution to take place in this great nation.

Yet, we’ve already allowed it. Indeed, we’ve done absolutely nothing about it, since it started.

And like idiots, we’re back to playing elections, thinking that’s going to solve our problems, even though not a single case of election fraud has been prosecuted since the fake election that “swept” Joe Biden into office with hundreds of millions of fake votes.

In other words, our national vote remains firmly entrenched in the hands of the enemy, our overthrowers. Nothing has changed since they placed Biden into office and began dismantling the physical and financial infrastructure of this nation.

So, what in the world are we doing getting excited about a new set of elections? Are we that stupid? Can’t you see the voting process has been thoroughly and completely taken over?

They have elections in Red China, too, don’t they? Yet the only people who win over there, are the communists.

So, let’s get over this stupid notion that we’re going to be able to vote ourselves out of this mess. It is simply not possible.

We can start holding elections again, after we clean house of the riff-raff trying to take us over and turn us into slaves.

We need to send some folks to jail, for life. And we need to hang a few others from lampposts in major cities. We can save the firing squads for the likes of Gates, Fauci, Schwab, Harari, and all of the others involved in the deadly “v” shots.

If these things are not done first…if the enemy isn’t thoroughly and decidedly defeated…elections are pointless.

We just celebrated our nation’s freedom, on July 4th. Yet, there is no “free country” left. We have to RESTORE it, or completely LOSE it.

We have to do it, ourselves. No one else is going to do it for us. The entire world is watching us sink like the Titanic, while the globalist powers-that-be collectively pick our nation’s bones like the vultures they are.

Can You Hear It Coming in the Air, Tonight?

Did you hear that great “BOOM!”

Somebody’s trying to wake us up out of our idiotic stupor. Somebody is sending us a signal.

So, will we take this opportunity to start throwing the bastards out, and taking our country back?

Or will we choose instead to sink into the mire of full-blown communism, and live the remainder of our lives as slaves, if we even make it through the great culling?

Let’s get to it. Let’s chase the bastards out of our country, now, while we still can, and then rebuild it from the ground up, with the Constitution as our template.