Jerusalem as the Coming Religious Capital of the World? 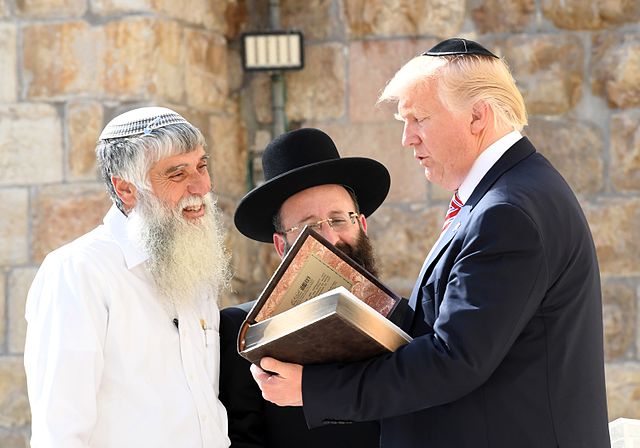 No sooner than the U.S. Embassy was officially moved from Tel Aviv to Jerusalem, political luminaries began declaring Jerusalem to be the home of all religious faiths.

“Jerusalem must remain a city that brings people of all faiths together:  To visit, to worship, to respect each other, and to appreciate the majesty of history and the glory of God’s creation.”

“We will continue to safeguard Jerusalem as a city of peace, as a home to all those of faith, a city of all its residents and citizens, of all religions and communities, who share together one city, which is so greatly loved by everyone.”

And how’s that working out so far?  Well, let’s see:

On Embassy opening day alone we have 55 dead Palestinian protestors, killed by Israel military snipers for protesting the Embassy opening at the Gaza border.  And 2,400 more Palestinians wounded by additional Israeli sniper fire.  As the Daily Mail put it:

“…a 14-year-old was among 55 shot dead along the Gaza border on what is already the deadliest single day in the Israeli-Palestinian conflict since a 2014 war between the Jewish state and Gaza’s Islamist rulers Hamas.

At least 2,400 more have been injured with hundreds of them by live bullets, according to Gaza officials as the Palestinian government accused Israel of committing a ‘terrible massacre’ and Amnesty International called the bloodshed an ‘abhorrent violation’ of human rights”.

Where I come from they call that a “turkey shoot.” In the Middle East, apparently, nothing says “Welcome, friend, feel free to come here to visit and worship!” like a steel-tipped bullet.

Jerusalem, which means “habitation of peace” in the Hebrew language, has become the antithesis of its own name.  Instead of becoming the Great City of Peace it’s touted to be, it has instead become a city of lies and bloodshed.

Nevertheless, the idea that Jerusalem should be the “city to all faiths” has been touted for a long time now.  Nearly 20 years ago, for example, in October 1999, the Rabbi Menachem Froman, former chief rabbi of the Israeli Knesset, wrote in The Jerusalem Report about what he called “A Modest Proposal.”

The rabbi stated that Israel must “aggressively frame the future” and work to “achieve a vision of Jerusalem at the End of Days.”  This would entail, he said, making Jerusalem the “Capital of the World.” He wrote:

The rabbi then stated that “Meetings and discussions are already taking place among (high-level) Jews, Muslims, and Christians with the aim of making Jerusalem into the capital of peace.”

Nearly four decades earlier, Israel’s first Prime Minister, David Ben Gurion, had also stated he believed that Jerusalem would become the centerpiece of the world.  He stated, in an interview with Look magazine, that when the time comes:

Thirteen years earlier Ben Gurion had written:  “Jerusalem is not the capital of Israel and world Jewry; it aspires to become the spiritual center of the world.”

Yep, a center of world peace and spirituality, but without the Prince of Peace, Jesus Christ.  That’s what the one-worlders ultimately have in mind for Jerusalem.

Even Chaim Weizmann, former President of the World Zionist Organization, wrote that

And over 100 years before that, in February 1883, it was written in the Jewish World magazine:

“The great ideal of Judaism is that the whole world shall be imbued with Jewish teaching and that in a Universal Brotherhood — a greater Judaism in fact — all the separate races and religions shall disappear.”

The Lord’s Word on the Subject

But what saith the Lord Jesus on this subject?  As it’s written:

“O Jerusalem, Jerusalem thou that killest the prophets and stonest them which are sent unto thee, how often would I have gathered thy children together even as a hen gathereth her chickens under her wings and ye would not! BEHOLD YOUR HOUSE IS LEFT UNTO YOU DESOLATE:  and verily I say unto you, Ye shall not see me, until the time come when ye shall say, Blessed is he that cometh in the name of the Lord.”

Well, the Jews still won’t say of Christ, “Blessed is He that cometh in the name of the Lord.”  They simply won’t acknowledge that He’s God’s chosen Messiah.  So their house remains desolate.  It produces no fruit for the Lord, because it rejects the Lord’s chosen Messiah and governs based on man’s empty religious traditions.

Nevertheless, as it’s also written, a time will come in the final generation of this flesh earth age that the world political leaders will indeed turn to Jerusalem and try to make it the religious and political centerpiece of the world.  As it’s written:

Zec 8:20  Thus saith the LORD of hosts; It shall yet come to pass, that there shall come people, and the inhabitants of many cities:

Zec 8:21  And the inhabitants of one city shall go to another, saying, Let us go speedily to pray before the LORD, and to seek the LORD of hosts: I will go also.

Zec 8:23  Thus saith the LORD of hosts; In those days it shall come to pass, that ten men shall take hold out of all languages of the nations, even shall take hold of the skirt of him that is a Jew, saying, We will go with you: for we have heard that God is with you.

Of course, this happens when Satan arrives to this earth and proclaims himself to be its “God.”  As it’s written of this event in II Thessalonians 2:4, “Who opposeth and exalteth himself above all that is called God, or that is worshipped; so that he as God sitteth in the temple of God, shewing himself that he is God.”

At that time, the entire world, thinking Satan is “God,” will make Jerusalem the world’s spiritual and political capital, and seat him as ruler in that city.

Interestingly, with the multiple nations now saying they too will now follow America’s lead and move their embassies from Tel Aviv to Jerusalem, we may well be seeing the very beginning of this process.  To learn more, see Israel to Build New Embassy Living Quarters in Jerusalem for the Nations.

Meanwhile, the angry protests from the Palestinians, and the deadly sniper fire from the Israeli military, continues.  The blood flows freely in the streets.  And as it’s written in the Word of God, so it shall come to pass in the final days of this flesh earth age:

Eze 24:9  Therefore thus saith the Lord GOD; Woe to the bloody city! I will even make the pile for fire great.

Eze 24:10  Heap on wood, kindle the fire, consume the flesh, and spice it well, and let the bones be burned.

Eze 24:12  She hath wearied herself with lies, and her great scum went not forth out of her: her scum shall be in the fire.

Eze 24:13  In thy filthiness is lewdness: because I have purged thee, and thou wast not purged, thou shalt not be purged from thy filthiness any more, till I have caused my fury to rest upon thee.

Jerusalem will ultimately be destroyed by the Lord, after having become the center of world religion and politics under Satan.  Our old adversary’s stench will be cleansed by God from the city, in preparation for New Jerusalem “which cometh down out of heaven from my God” (Revelation 3:12).

As it’s written, so it will come to pass.  Pray for the peace of Jerusalem?  Well, you’d better know which Jerusalem you’re praying for, before you do so.  If that confuses you, see my previous study, Jerusalem, or New Jerusalem?